You thought those other annual gatherings at the home of "The Motor Company" were something, eh. Well, when the number reaches that beautiful base ten symmetry of 100, things are going to really pop. What is a dedicated BMW club member doing around Milwaukee during a Harley gathering? Why, collecting material for this submittal, of course.

Actually it was business that found me on the same roads as thousands of the faithful being drawn to the city made famous for beer and bikes. There were all those New York tags on Hogs headed west on the Ohio turnpike, most of them with 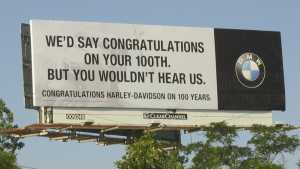 Congratulations, Harley-Davidson1 their cute biker outfits, some actually carrying camping gear and changes of clothing. Maybe the chase vehicles had the bulkier items, because some of the riders had nothing extra attached except for those little helmets strapped to the sissy rails.

All right. There were some really serious trippers among the throngs blatting past my company van. It wasn't necessary to have complete rearward vision to avoid them as they approached to pass. The distinctive "potato, potato" -er, read BRAPP, FLATT exhausts notes tipped me off well in advance, and I DO appreciate them saving my life. Most employed good road manners as they rode in their signature side-by-side safety pattern. None looked up to my driver's window to receive my clenched fist salutes, you know, Right On, Bro.

What may have been a snide attitude toward their choice of mount and lifestyle melted into sympathy when we all reached the tri-state confluence of Michigan/Indiana/Illinois super highways. Anybody who has ever had to traverse this section of the country knows what comes next. Congestion. There they were, groups not unlike something we as a club would put together for a group ride, sweltering in the sun and humidity plus the heat coming off those 45 degree twins, the right side especially. Those custom bikes don't have a lot of cruising range to them and there were multiple riders pushing their bikes along in the snail's pace procession. To be sure, there were some groups who hit the berms to avoid these snags, but not as many as you would think, being outlaws and all.

There was a surprise awaiting me as I approached the outskirts of the city. I had seen what looked like parade spectators hanging on every sort of roadside support, but closer in there were folks on overpasses with signs. WELCOME HOME BROTHERS AND SISTERS. Or HAVE FUN IN TOWN or SHOW ME YOUR... I couldn't catch the last word as I ducked under the bridge, but I think it was TATS. There were a LOT of tattooed persons. Then there were the bikers.

Pulled into a plaza for gas and the bikes were everywhere and in no particular hurry. Some spoke about what I had just described. "This town loves us, man.", said one leather vest clad, portly gent, struggling to suppress a tear. "They dig us!" And why not. The estimated impact on Wisconsin's economy for the four day event was $132 million. Nearly a quarter of a million cyclists were expected at the lakefront venue. Seventeen countries were represented. Greater Milwaukee expected to pocket an extra $37 million. There were 10,000 bikes in the parade. There were twenty one official "block parties". Hotel and motel reservations required a four night minimum - if you could find one this side of Madison.

It was a party all right. No life-style Harley rider of any salt would miss it, and you know, that's okay. Different machines for different persons will never be a catch phrase, but it does recognize that the mystique is all that's necessary for some folks. Me, I prefer a bike that will go, stop and turn. Call me a stickler for detail, but I'll keep my "K" and now my "R".

Copyright © 1997-2022 Finger Lakes BMW Club.
Contact us with your comments if you wish.
It's Sunday the 27th of November at 8:07 in the
Finger Lakes. Do you know where your BMW is?
Finger Lakes is on Facebook!